Since 1978, Cherokee Rafting is the Ocoee River’s #1 family-friendly Ocoee River Whitewater Rafting & Ocoee River Rafting company. We love working with families, youth groups and corporate team building outings. With 10 incredible miles of continuous class III & IV rapids, we invite you to take the plunge on America’s favorite river. Join us for an exciting rafting adventure on the Ocoee River flowing through a beautiful gorge inside the Cherokee National Forest. Southeast Tennessee is famous for its big waves, mountains and beautiful scenery. We take pride in our reputation with a friendly and relaxing atmosphere that keeps folks returning year after year. Because the Ocoee River is dam controlled, the rapids are always guaranteed. There’s a reason we call this place home, We’d love to share the Ocoee whitewater rafting experience with you. 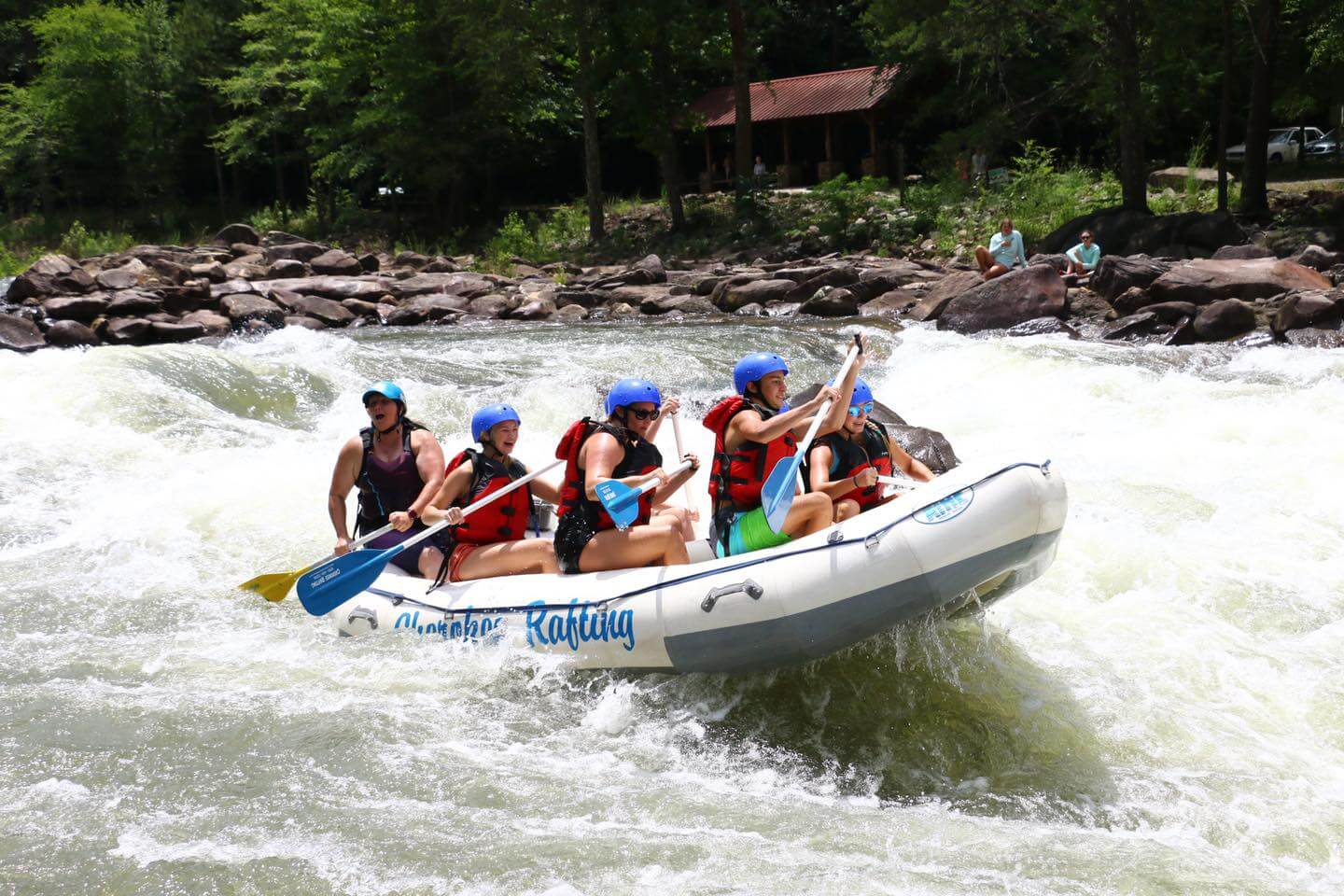 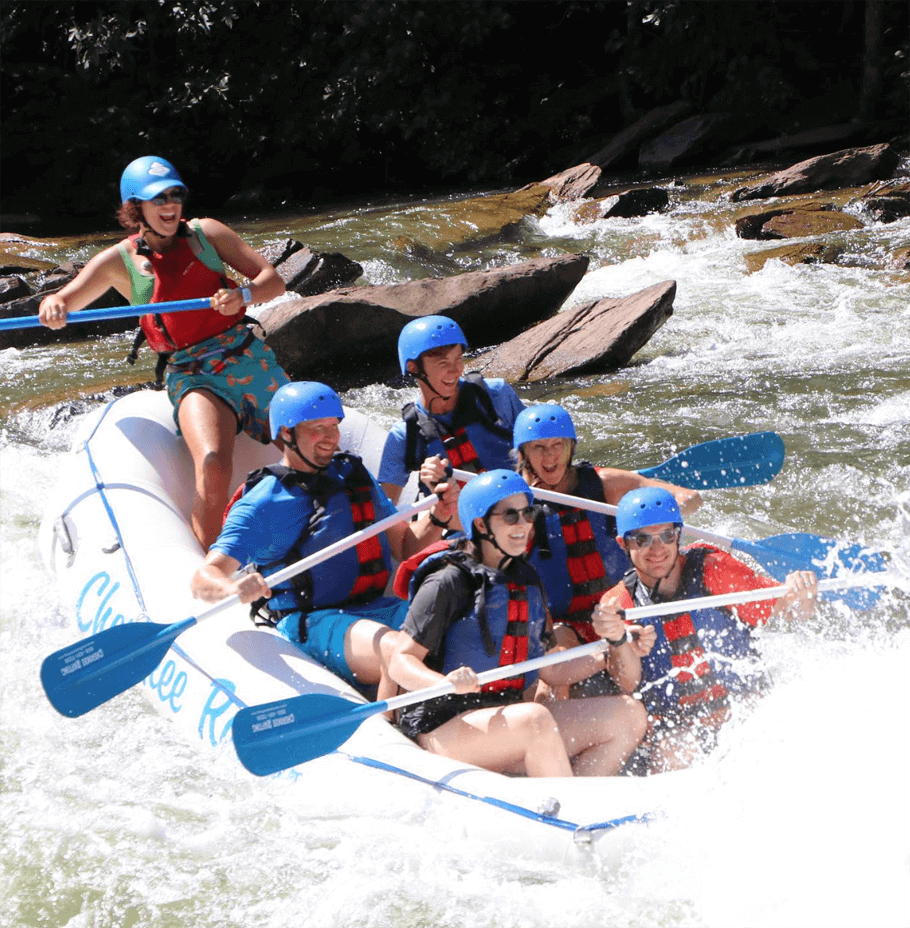 WHY YOU SHOULD CHOOSE US

Cherokee Rafting was founded in 1978 on the Ocoee River and has grown into one of the top preferred and most respected white water rafting companies in the country. Our competitive edge lies in a passion for safety, superior customer service and building long-standing relationships with satisfied guests. We have one of the best groups of hand-selected river guides who share our same passion for the love of our sport and the Ocoee River. They’re friendly, funny, and well-trained professionals who’ll help you at every step of the way. An exciting, wholesome, action-packed white water adventure is waiting for you at Cherokee Rafting. Come experience the exhilarating rush and see what the Ocoee River is all about!

In the upper mountain highlands, natural springs release pure water down mountain slopes known as watersheds. These waters gather into streams that find their way to creeks, flowing until they merge with mountain rivers as they journey across the lands and out to sea. In 1911, President Theodore Roosevelt sought to protect these watersheds and therefore authorized the purchase of these public lands, creating The Cherokee National Forest.
The Ocoee River, has its beginnings in the mountains of Northeast Georgia where it is known as the Toccoa River. Its headwaters descend from the mountains in northern Georgia cutting its way into southeastern Tennessee, weaving its rushing whitewater westward, through the Ocoee Gorge and into Parksville Lake.

Originally owned by the Eastern Tennessee Power Company, the river was dammed to build hydro-electric plants. The river is now controlled by three dams, operated by the TVA [Tennessee Valley Authority] power company.

Dam No.1 is a hydro-electric plant in the community known as Parksville. The dam itself lies where the Ocoee emerges from the Appalachian Mountains. The East Tennessee Power Company began construction in 1910 and completed it in 1911. The lake is 1,930 surface acres with 109 miles of shoreline developed for recreation. The dam is 135 ft high and 840 ft across. Here, the Ocoee flows east & northward for several miles before feeding into the Hiwassee River which in turn feeds into the Tennessee River and thus the Mississippi.

Dam No.2 was also originally built by the East Tennessee Power Company in 1913. It is 30 ft high and 450 ft across. This structure diverts the water into a wooden flume at the end of which lies the historical Ocoee #2 Hydro-electric Plant. The historic wooden flume still to this day diverts the waters of the Ocoee River into an elevated path, concentrating water pressure for the hydro-electric powerhouse. If you have never seen the Flume it may be hard to imagine. It is a wooden trough measuring 14’ X 10’ stretching 4.7 miles long…yet it falls only 17 feet over that distance. The river itself drops about 250 ft in elevation. The force of the falling water is the secret behind its ability to generate. It was built from yellow pine from the forests of Georgia, North Carolina and Tennessee…using just over eight million board feet of lumber. Mules, wheelbarrows, picks, shovels, dynamite were the tools of the times. Manpower being the most important one of them all.
TVA purchased the power system in 1939. In September 1976, the wooden flume was shut down for reconstruction and once again the river ran free. Soon, people began showing up to the Ocoee with army surplus rafts to run the whitewater rapids. Rafters struggled with TVA to obtain the right to ride the whitewater. After much resistance, TVA agreed to schedule water releases into the river, and commercial rafting found a home on the Ocoee in 1977.

In 1978, friends thought they were crazy, but owners John and Judy Thomason had a vision. At a time when the sport of whitewater rafting was in its infancy and only a handful of people even had the nerve to run the Ocoee, someone had to do it…right? Having grown up just minutes from the river, John had a plan. There weren’t any self-bailing rafts, the paddles were short and flimsy, and the life jackets looked quite funny. Cherokee Rafting was born.

Aside from commercial rafting trips, whitewater racing events have been held on the Ocoee since 1977, bringing the infamous gorge to the attention of the world making it a world class whitewater river. The Upper Ocoee had been a dry riverbed throughout most of this century, which enabled the manipulation and construction of a world class racing course. Being approximately 100 miles north of Atlanta, helped make the Ocoee the ideal place to hold the 1996 Summer Olympics Slalom Canoe/Kayak competition.

July 1996 brought 14,000 spectators and more than 1,000 volunteers/staff to the banks of the Ocoee River to witness the excitement of approximately 135 world Olympic competitors. The Olympics created a new course and awakened more people to the excitement of whitewater sports.

In 2012, the Ocoee was name the #1 whitewater destination in America hosting over 230,000 rafting visitors every year. Quite an accomplishment for waters born from such a rugged yet almost pleasantly designed fate.

Awarded TripAdvisor’s Certificate of Excellence consistently for the past 10 years! Selected by National Geographic as an official destination for Geo-tourism. If there’s any question which rafting company to use for your Ocoee River white water adventure, you’ve found the right place. Grab a paddle, snap your buckles, let’s go! Click the logos to see what they say about Cherokee Rafting!
BOOK NOW